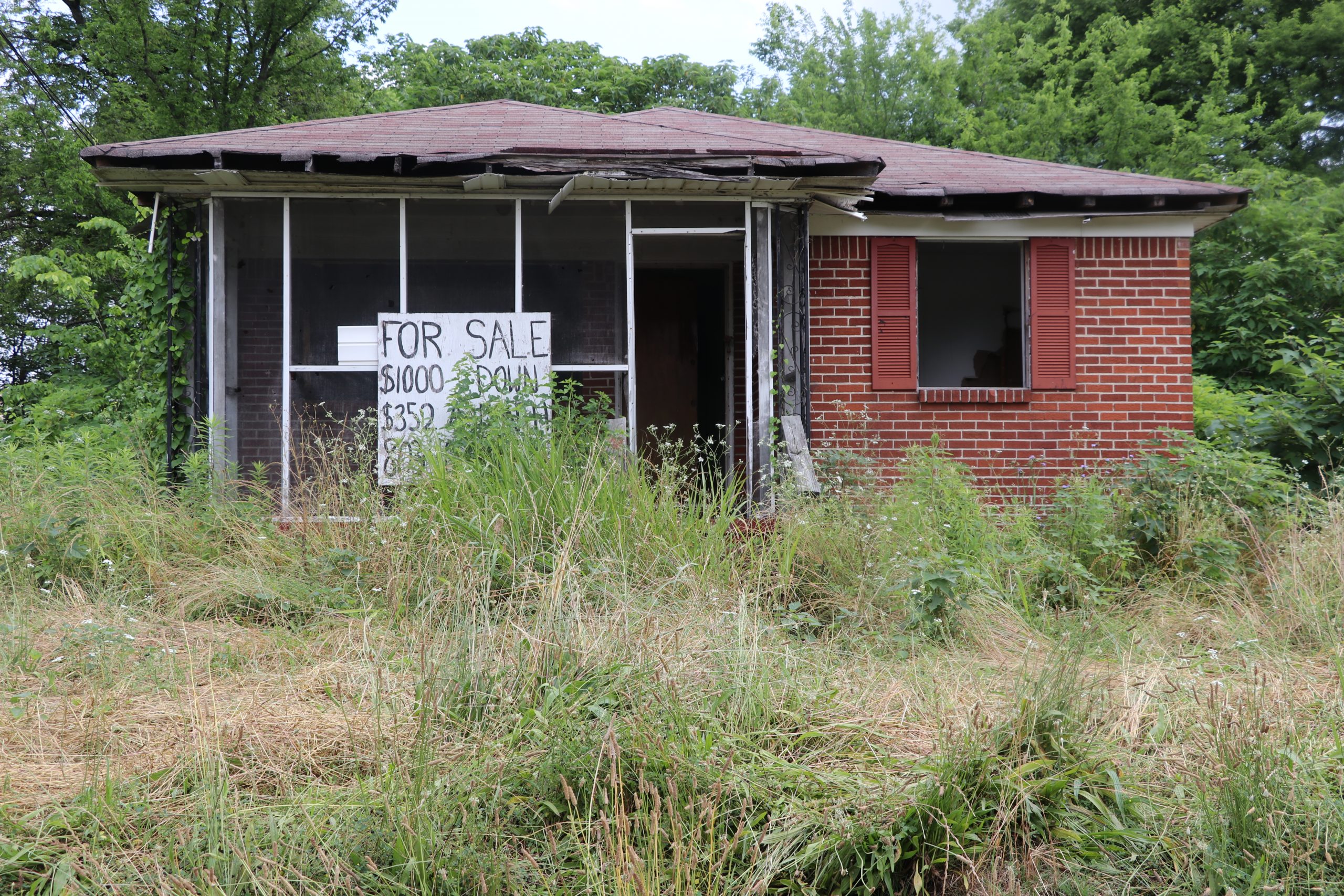 Their demands to have the 35th Avenue Superfund site placed on the National Priorities List triggered a bribery scandal to keep it from happening.

BIRMINGHAM, Ala.—Gerica Cammack put her children’s toys into boxes, some of the last items she had to pack in May before her family moved out of the area she’s always called home.

Two of her kids, ages 2 and 8, have skin problems she thinks are related to pollution from steel, cement and coke manufacturing plants that have dominated parts of north Birmingham for decades.

After years of visits to doctors’ offices, Cammack finally decided to move. “I have to pack up and move for the sake of my health and my kids’ health because we’ve been sounding the alarm,” she said.

Cammack was fleeing Collegeville, one of the three predominantly Black north Birmingham neighborhoods in the 35th Avenue Superfund site. Collegeville, Harriman Park and Fairmont are archetypal “environmental justice” communities under a Biden administration executive order designed to deliver enhanced benefits in such areas disproportionately harmed by pollution or the adverse effects of climate change.

While many communities of color suffer because of their close proximity to hazardous waste Superfund sites, these three north Birmingham neighborhoods are the Superfund site, their homes built decades ago on lots graded with fill from the plants, which is laced with arsenic, lead and benzo(a)pyrene (BaP), a hydrocarbon. BaP and arsenic are both known carcinogens.

Michael Hansen, executive director for the Greater-Birmingham Alliance to Stop Pollution, described the neighborhoods as being at the intersection of “environmental degradation and systemic racism” and said of this part of north Birmingham “right now it looks like a war zone.”

He and other activists, along with many residents, want the 35th Avenue Superfund site added to the National Priorities List, a registry of the nation’s worst hazardous waste sites that brings additional, long-term cleanup funds. With the Biden administration now targeting enhanced benefits for environmental justice communities under the Superfund program, the residents hope NPL status could include more money for remediation and possible relocation.

Neither the Environmental Protection Agency, which began considering the site for inclusion on the NPL in 2014, nor the residents, who saw NPL status as clearly warranted by federal law, had any idea what the proposal would trigger.

In 2018, an executive with the Drummond Company, owner of ABC Coke, was convicted in federal court, along with an attorney from a major Birmingham law firm, for bribing a state representative to oppose any move to add the site to the NPL. ABC Coke was one of five local companies notified by the EPA that they could be held responsible for polluting the site.

The state representative was also convicted and sent to prison for taking the bribe in the form of a $375,000 contract to his foundation.

Although the EPA first proposed that the site be added to the National Priorities List seven years ago, it still has not happened. To be added to the NPL, sites need to score at least 28.5 in the EPA’s Hazard Ranking System, which assesses the relative potential of sites to pose a threat to human health or the environment. The 35th Avenue Superfund site has a score of 50.

Even without a place on the NPL, EPA spokesman James Pinkney said remediation work is proceeding. The federal clean-up process began in 2014 and is scheduled to conclude by 2023. The EPA’s most recent update said 461 of the 640 contaminated properties have been remediated.

“We’ve addressed the contamination the same way that we would if it was listed on the NPL,” Pinkney said.

Subash Patel, the EPA’s on-site coordinator, said he is confident the soil will not be recontaminated because the contamination happened generations ago, when materials from nearby industrial facilities were brought onto residential properties “for development and to mitigate flooding.”

The EPA has spent about $28 million thus far removing the top six or eight inches of toxic dirt from the yards of those homes. Clean fill is then added, grass is planted and any amenities removed from a yard, like fences, are returned.

But Hansen, of the Greater-Birmingham Alliance to Stop Pollution, said residents “don’t just want their soil cleaned up. They want a community that looks and feels like a place to raise a family.”

Hansen believes the situation in north Birmingham presents the Biden administration with an opportunity to intervene more aggressively and demonstrate its commitment to environmental justice. Beyond advocating for NPL status, his organization is reviewing ABC Coke’s air pollution permit issued by the local health department two years ago.

In a consent decree finalized with the EPA earlier this year settling various emissions issues, ABC Coke agreed to detect and prevent benzene leaks and to pay a $775,000 civil penalty, half of which will go to the local health department to benefit nearby residents.

Beyond the quest by some residents for NPL status for the Superfund site, Collegeville is under consideration to become a World Heritage site for another noteworthy landmark: Bethel Baptist Church.

The institution has served residents there for more than a century. During the civil rights movement, the church was headquarters for the Alabama Chrisitian Movement for Human Rights from 1956 to 1961 under the Rev. Fred Shuttlesworth. The organization was formed to fill the void left when Alabama banned the NAACP from operating in the state. Bethel also served as a key location for the planning of the Freedom Rides, which desegregated public transportation.

Shuttlesworth served as pastor of the church from 1953 to 1961. He and his family were almost killed when their parsonage was bombed on Christmas Day in 1956.

Shauntice Allen, an assistant professor of environmental health sciences at the University of Alabama-Birmingham who lives near the Superfund site and researches the intersection of race, place and environmental exposure, said the predominantly Black neighborhoods nearby in north Birmingham remain “environmentally unjust” because they lack political power. Members of these communities rarely sit on regulatory boards or have strong representation in local governments, she said.

In 2019, Allen was among four authors of a paper in the International Journal of Environmental Research and Public Health, “The Search for Environmental Justice: The Story of North Birmingham.” It presented a stark description of the disproportionate impact of pollution on residents’ lives and health in north Birmingham, and the city as a whole.

“In addition to the Superfund Site, the EPA’s toxic release inventory (TRI) in 2019 showed that the area of North Birmingham contains the top four industries responsible for chemical releases,” the paper said.

Among plants listed in the registry were ERP Compliant Coke, in operation since 1920, which produces 460,000 tons of coke annually. EPA data shows that over a five-year period, the plant had risk scores “much greater” than the median for other coke plants and other facilities in Alabama and the rest of the country.

Coke is a high-carbon fuel made by baking coal that is used for smelting iron in blast furnaces.

The area’s other coke factory, ABC Coke, produces 2,150 tons of coke a day and is the largest producer of foundry coke in the country. Both ERP  and ABC Coke have been identified by the EPA as “potentially responsible” parties for the pollution at the 35th Avenue Superfund site, the paper said.

The dangerous emissions are not limited to north Birmingham. In 2017, the paper said, there were 32 facilities across Birmingham on the EPA’s toxic release inventory responsible for 1.9 million pounds of chemical emissions. “Out of 56 states/territories nationwide, Alabama ranks 10th based on total release per square mile,” the paper said.

More troubling than that emissions data was a historical note in the paper about land use and zoning in north Birmingham. “Birmingham chose to ignore the 1917 Supreme Court ruling Buchanan v. Warley that overturned racial zoning ordinances by arguing that threats to peace were imminent and severe if African Americans and whites lived in the same neighborhoods,” the paper said. “The need to maintain order overruled the constitutional rights of those involved. Essentially, government policy kept the location racially segregated through zoning ordinances for decades, with racial zoning maps used to guide its commercial and residential planning in the following decades.

“Heavy industry in this area and the resulting 35th Avenue Superfund Site have caused significant environmental pollution over time, leaving residents concerned that their health and well-being are at risk from continued exposure.”

While various national reports have called for greater efforts to help mitigate the impact of pollution on marginalized communities, the paper concluded, “in North Birmingham the burden of proof continues to rest with residents to reduce and prevent further pollution in their community.”

Allen said in an interview that Collegeville, Harriman Park and Fairmont need a “holistic approach” to deal with the Superfund threat and rebuild the community. “It’s not enough just to move dirt,” she said.

When Gerica Cammack left Collegeville with her children in May, they headed for Charlotte, North Carolina, where she said the sky “is just like an animated cartoon blue.” But leaving proved to be harder than Cammack expected.

Two months later, she moved back to her hometown, citing financial concerns. She said she still wants to get away from the Superfund site someday. But for now, being close to family is important for her three children’s upbringing.

In the Harriman Park neighborhood, activist Keisha Brown lives across the street from an industrial yard and has suffered from asthma for 30 years. Abandoned buildings are common sights in Harriman Park, in the aftermath of steel’s collapse in the 1970s.

Brown has made it her mission to fight for more resources for members of the community, especially with the health issues many of them face. “They are my family,” Brown said.

Still, she celebrates when area residents are able to find a way out.

“We are sandwiched in by industry and nobody seems to care,” Brown said. “It’s like a forgotten community, and it’s like a nightmare.”