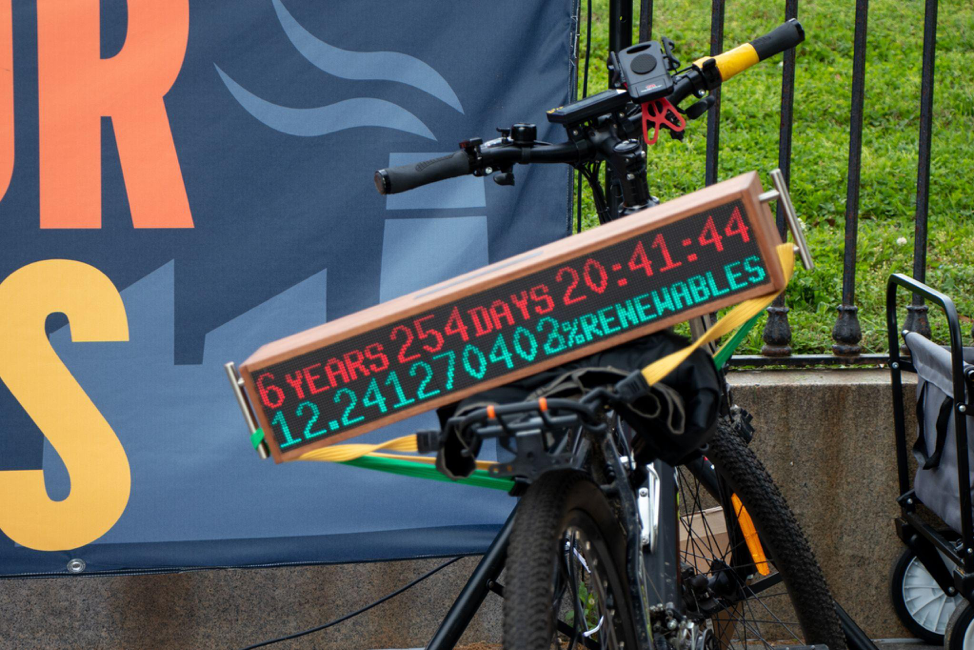 Caravaning from New York, leaders from 350.org and other groups gave the president a ticking clock with a deadline for action just six years from now.

WASHINGTON—As President Joe Biden’s virtual climate summit began on Thursday, dozens of environmental activists from across the country tried to get his attention by delivering a gift: a foot-long climate clock the activists say will count down the days he and other world leaders have to reach zero carbon emissions, before some climate impacts become irreversible.

In addition to the clock, they delivered a petition to the White House with more than 300,000 signatures, urging the Biden administration and the other leaders to stop approving all new fossil fuel projects and to fund a transition to a green economy.

“We want more than just empty promises and empty meetings,” said Thanu Yakupitiyage, spokeswoman for 350.org, one of the organizers of a caravan of sustainable vehicles that left New York on Monday and arrived at Union Station in Washington on Wednesday, before the rally outside the White House.

The original climate clock is projected onto a building in Union Square in New York City, where activists started their protest. Once in Washington, they delivered the smaller version of the clock to Biden to make sure that he and world leaders got the message.

The climate clock counts down to a “deadline” of six years from now, which the activists say is the best estimate of when carbon emissions must be at zero to avoid a rise in the global temperature of more than 1.5 degrees Celsius. The estimate is based on calculations by the Mercator Research Institute on Global Commons and Climate Change. Starting this week, the climate clock also includes a “lifeline” that shows how much of the world’s energy comes from renewables.

“With its deadline and new lifeline, the climate clock makes explicit the speed and scope of action that political leaders must take in order to limit the worst impacts of climate devastation,” Laura Berry, lead researcher for Climate Clock, a collaboration between climate activists, scientists and artists, said in a statement.

There are other estimates of the pace of emissions cuts the world needs to meet to achieve the Paris Agreement goal of keeping warming to 1.5 degrees Celsius. The United Nations Environment Program, in its annual emissions gap report, focuses on a less ambitious pathway: a goal of net-zero emissions by 2050. But nations are not anywhere close to meeting that trajectory, which would involve cutting emissions 45 percent from 2010 levels by 2030.

The Biden administration is meeting virtually with 40 world leaders on Thursday and Friday to discuss actions towards combating climate change. During his first days in office, Biden rejoined the Paris climate agreement and revoked the permit for the Keystone XL pipeline through executive orders. But other oil pipeline projects are moving forward under the Biden administration, including the Line 3 pipeline, from Canada to Wisconsin, and the Dakota Access pipeline, which is located near Native American lands.

The activists emphasized that more drastic action must be taken immediately to create substantial change and protect future generations, especially as the United Nations Climate Change Conference (COP26), to be held in Glasgow, Scotland in November approaches.

“We cannot debate facts. We have to take action based on the facts,” said Natalie Mebane, 350.org policy director. “And that action says: ‘How much do you need to reduce our emissions not just domestically, but internationally?’ The science says: ‘We have to get off of fossil fuels immediately.’”